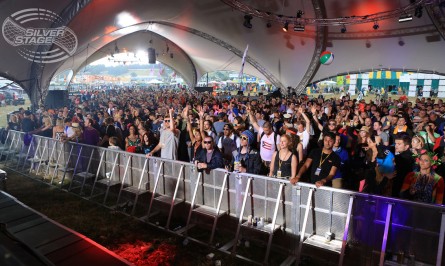 Ah, the mayhem, the fancy dress, the unbelievable headliners – it’s no wonder all 150,000 tickets for next year’s Glastonbury Festival sold out in just 29 minutes! There’s nothing quite like this epic city of lights in the midst of rolling Somerset hills that springs up from nowhere in a matter of weeks.

The Sonic Stage, now two years old, has well and truly cemented its place as the centrepiece of the festival’s Silver Hayes dance area. With its bold lines and sweeping curves the S5000 structure has become the festival’s cathedral of electronic dance music.

On Friday, the congregation bowed down to a veritable bishop of electronic music, techno veteran Richie Hawtin, whose audience was no less pleased by the music as his signature trendy comb-over. The legendary Fatboy Slim was master of ceremony on Saturday, as usual attracting gargantuan crowds. And there was no let up in pace on the Sunday either, with Irish trance gods Above and Beyond boggling our minds and leaving us talking in tongues after the stage’s closing set.

The S5000 5V structure provided cover for some 4,000 Glastonbury revellers. Brand-new hexagonal concrete ballasts and one metre base extensions increased the height of the structure dramatically, meaning better sight lines to the stage for hundreds more outside.

Despite a few spots of rain, it was another magical Glastonbury for the whole team, with both our structures flying the Silver Stage flag in style. Until next year!

← S2 Concert soars with British Airways at Isle of Wight 2014
Boomtown: the iconic Arc Bar is back →