S2 Concert soars with British Airways at Isle of Wight 2014 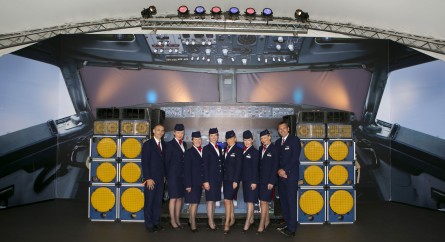 A true pilgrimage for any festival-goer, the Isle of Wight Festival predates Glastonbury and, along with Woodstock in America, can rightly lay claim to being a forefather of the modern music festival movement.

Skip forward half a century to 2014 and the festival has evolved. Our S2000 Concert is housing British Airways venue BA Music, which aims to help the best new and emerging musical talent really “take off” (wheeey). Over the course of the weekend, nine brand new acts from around the UK and Europe were given an amazing opportunity to play to crowds of thousands.

The structure certainly looked the part. British Airways’ distinctive branding displayed both inside and out, and the stage was transformed into the inside of a cockpit, with British Airways’ airhostesses milling around fluffing pillows and checking everyone had enough legroom.

And there were more aeronautical delights in store, with the Red Arrows performing their trademark aerial acrobatics over the festival. They flew directly over the S2000 several times, much to the joy of the revellers who, thanks to the curved design of the Saddlespan raised on our base extensions, were able to watch the display from inside. Here’s a video of the S2000 in action at the event.

The Isle of Wight Festival began back in the heady flower power days of 1968. It ran for three years before the British government effectively shut it down by introducing what became known as the ‘Isle of Wight Act’, preventing gatherings on the island of more than 5,000 people without a special licence. This was in response to the festival attracting what at the time was thought to be the largest gathering of people anywhere on the planet, with some 600,000 attendees.