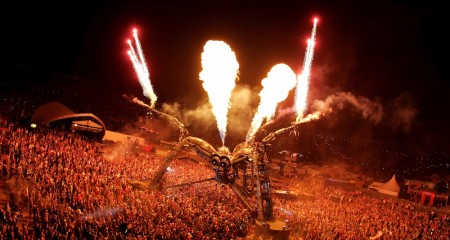 Boomtown Fair is a festival that doesn’t concern itself with booking big names but rather opts for creating something a little more unique and, at times, surreal. This is a festival that is as meticulous about its visual appeal as it is about its musical line up, which features a heady mix of reggae, ska, dub, swing, punk and thunderous bass music. Spend a weekend here though and you’ll soon see that it’s the environment itself that often seems to take centre.

It’s no surprise that once again Boomtown approached Silver Stage to help them realise their vision to create a truly immersive and outlandish festival experience. Boomtown’s organisers understand the potential of our structures to create a believable world that is as visually arresting as it is a whole lot of fun.

Our S5 concert configuration, on base extensions and decked out in jet black and shiny silver, was used to resurrect the brilliant and popular Arc Bar for the Arcadia area. Boomtown is exactly the kind of conceptual festival environment that the S5000, with its looming canopy and futuristic aesthetics, looks completely at home in.

Just a stone’s throw from the Arc Bar stands one of Boomtown’s gargantuan showpieces; a towering mechanical spider that Glastonbury and Bestival revellers might well recognise. Replete with flamethrowers, rocket launchers and suspended DJ booth, this metallic musical creation epitomizes Boomtown’s post-apocalyptic look (imagine Spaghetti Western meets Mad Max 3) and hedonistic reputation. For three nights the Arcadia zone witnesses a sea of delirious ravers weave between the Arcadia bar and its giant spider, which sporadically spits huge jets of fire into the night sky. This is festival partying as its most epic, with Silver Stage at the epicentre.

Our contribution to Boomtown didn’t stop with the Arcadia zone. Our new 10m x 10m and 5m x 5m Quadra-sided Tensile structures were also used throughout the festival to create temporary indoor venues, housing some of the unique and wonderful delights on show at the festival. These included the Luna Cinema, Invisible Photo Booth and the absolutely fantastic Happy Slap Boutique. Two 5m x5m Quadra-sided’s were also used as makeshift banks. In fact you don’t have to wander around Boomtown for long before you come across a Silver Stage structure.

There’s no doubt, Boomtown has come of age. Since its inception in 2009 the festival has gone from strength to strength and we’re happy to have been a part of that journey. In fact based on this year’s magnificent look and feel, the festival has surely established itself as a contender for the title of UK’s most outlandish festival. Having our structures at the heart of Boomtown’s conceptual landscapes has seen Silver Stage become an integral part of something truly ambitious. Long may this weird and wonderful festival continue.

← S2000 DuoSpan is Raising the Roof
A Glastonbury Legend is Born →