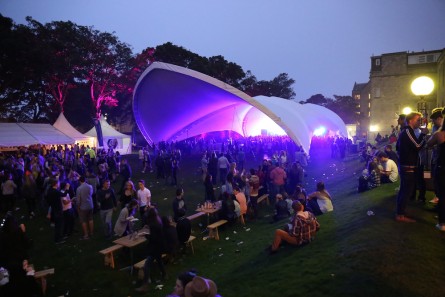 This September, we’re thrilled to be returning to Starfields for a second year with our S5 DuoSpan Extended. It’s the launch event for the crown jewel of Fife’s student event calendar, St Andrew’s Charity Fashion Show, and a total pleasure to be involved with.

Last year, our S5 DuoSpan Extended in sleek white on base extensions formed the central hub of the event, featuring eclectic array of musical delights, ranging from local acts to the likes of Radio 1 DJ Nick Grimshaw and Neon Jungle. Headliners for this year are still to be confirmed.

Describing themselves as “a force for philanthropy in Scotland”, the organisation has raised over £380,000 for all sorts of good causes over more than two decades.

Mark Jones, Director of Starfields, said: “Silver Stage’s DuoSpan was a spectacular stage for all our main acts of the day. With a choice of sizes and colours, we were able to select a configuration to fit perfectly within the St Andrews courtyard, and the sleek white option looked stunning set against the prestigious building.”