Armadillos and high fashion at Starfields 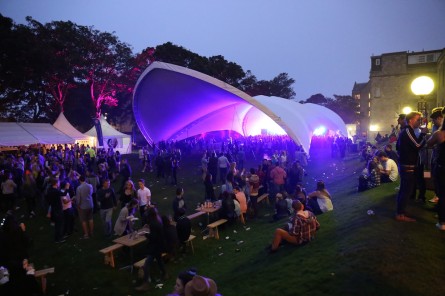 This September, a gigantic month in Scottish history, we were lucky enough to head north amidst the palpable energy and anticipation surrounding the referendum. Somewhere in the country, Alistair Darling was putting on his cufflinks and brushing his eyebrows. Meanwhile, we were doing the same thing at a fashion party in Fife.

Billed as a one-day festival minus the grubbier bits (for a start, the camping and the mud) our S5 DuoSpan Extended took centre stage at Starfields, the launch event for the student-run St Andrew’s Charity Fashion Show. Describing themselves as “a force for philanthropy inScotland”, the organisation has raised over £380,000 for all sorts of good causes over more than two decades.

Lapping up the last of the summer sunshine, immaculately-dressed students milled around making the most of the free face-painting, trying on flower headbands and sipping cocktails.

One party-goer recalled how “the focal point of the venue was undoubtedly the large, armadillo-shaped tent which housed the main stage”. That’s probably the first time we’ve heard the mammalian comparison, but we’ll take it as a compliment! It was here in the Duospan that crowds were treated to an eclectic array of musical delights, ranging from local acts to the likes of Radio 1 DJ Nick Grimshaw and Neon Jungle.

The organisers made the most of the DuoSpan range’s versatility, choosing from options of white or silver skin and elevation of up to 9m on base extensions.

Here’s what Mark Jones, Director of Starfields, said: “Silver Stage’s DuoSpan was a spectacular stage for all our main acts of the day. With a choice of sizes and colours, we were able to select a configuration to fit perfectly within the St Andrews courtyard, and the sleek white option looked stunning set against the prestigious building.”

This year, the event raised £28,000 for the organisation’s nominated charity Worldwide Cancer Research (formerly AICR), which funds cutting edge research into the causes of cancer.