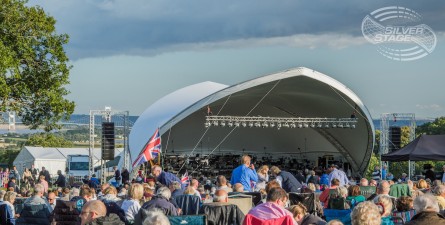 The sky was aflame with a late summer sunset on Chepstow Racecourses, the most perfect backdrop to the orchestral extravaganza that was Proms in the Park earlier this year.

Glasses clinked and picnics were duly munched as revelers wrapped in warm blankets were serenaded under a flame-red sky by the Welsh National Opera Orchestra, playing classic compositions from Puccini and Tchaikovsky from underneath Silver Stage’s impressive S5000 SL structure.

And if that wasn’t enough, guests were then treated to their own personal RAF aerial display by a Spitfire and a Hurricane who weaved through the sky high above the Severn Crossing. Anyone still bored? Well, the night then concluded with fireworks. Blimey!

One attendee described how “a white stage like a half-buried conch shell emerged from the ground.” That’ll be our monolithic S5000 SL, a unique piece of engineering exclusive to Silver Stage, with increased height for even greater flexibility.

Luxurious features such as our opera end wall and modern aluminium doors with tinted windows added the level of elegance the occasion demanded. Features such as these really set the S5000 SL apart from all its contemporaries.

Here’s what Josh Williams, Senior Project Manager at Network Productions said about us “We were delighted to partner with Silver Stage, whose professionalism and cooperation throughout helped make Chepstow Proms in the Park 2014 a great success. The S5 SL was a fantastic step up from the S5 we had previously, the extra capacity making it a truly magnificent setting for an orchestra.”

The event raised more than £2000 for the RAF Benevolent Fund.