Paving the way for greener festivals 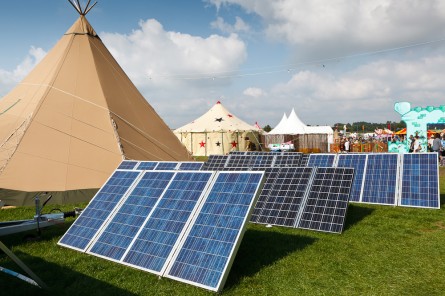 Gigantic pats on the back to Shambala Festival, who recently announced that the event is now 100% renewable, powered solely on recycled vegetable oil, solar, wind and pedal power. That’s a cracking achievement for a festival of its size – at around 10,000 capacity, they’re one of the largest festivals powered purely by renewables. Thanks to investments in wind energy, Shambala is also ‘carbon net positive’ – so in terms of carbon emissions, they’re leaving things better than they found them.

It’s a great stride for the events industry in a country that’s lagging behind its neighbours in terms of its renewable energy policy. Despite being one of the best-positioned countries in Europe for offshore wind generation, in 2014 the Government reported in its electricity fuel mix disclosure that here in the UK, we’re a mere 16.7% renewable. A whopping 34% of our electricity still comes from coal.

Compare that to our European neighbours to put things in perspective. Denmark, whose on-grid electricity is currently sitting at over 40% renewable, has just announced that it’s aiming to end all burning of fossil fuels by 2050. Germany has invested billions in renewables and is expected to hit around 30% renewable grid electricity this year – 90% of which will come from household solar.

So why are we falling behind the rest? One theory is that the British population just aren’t vocal enough. Justin Gillis writes for the New York Times: “The 5.6 million Danes have pushed harder than the Germans, they have gotten further — and they are reaching the point where the problems with the energy transition can no longer be papered over.”

It’s an interesting idea but one which takes culpability away from the government in determining the country’s future – a future in which coal has no place. With global temperatures currently on track to rise 3.6°C by 2040 – far beyond the tipping point of 2°C, there’s no time to wait around.

And that’s why Shambala deserve nothing but praise for taking the initiative. Although not the first festival to go 100% renewable (several much smaller festivals, including Sunrise, take that crown), they’re the first amongst the bigger players.

And festival suppliers have a huge part to play in forging a low-impact future for events too – something we’re passionate about. Thanks to their innovative Saddlespan frames, our structures are lighter and take up less room than traditional tents such as big tops, so they’re much more efficient to transport. That means less machinery, less vehicles and less manpower needed for setup.

It’s time for suppliers and festivals alike to keep up and clean up – for a greener events industry!

← Champers & TOWIE at Dukes Polo
A grand entrance: a simple guide to our tent-ends →