Glastonbury Arc Bar is a triumph for Silver Stage 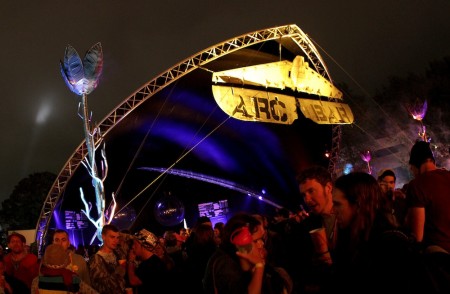 As if one show stopping structure wasn’t enough, in addition to the Sonic Stage in the Silver Hayes dance field, Silver Stage also supplied our flagship S5000 SL system to create the magnificent Arc Bar in the hedonistic Arcadia zone at Glastonbury 2013. The event marked the first official deployment of our new SL system here in the UK, and what an event to premier our gorgeous new structure. Glastonbury is undoubtedly the most famous music festival in the world today and deservedly so. This is a festival that doesn’t do anything by halves and supplying two of our structures, to two of its most popular areas, was a proud moment and a landmark occasion for Silver Stage.

Coming pre-raised, without the need for base extensions, the S5000 SL was always going to be the obvious for the festival’s organisers. Our newly designed system has been rolled out during the summer allowing for the overall height of the finished structure to be raised further. This gave the Arcadia team far more internal space to work with and allowed for increased production facilities and crowd capacity. There is no denying the S5000 SL looks epic.

The Arc Bar has become focal point of the Arcadia zone, which is characterised by its industrial design, grittiness and, this year, a vast mechanical spider. The S5000 SL was fitted with a black interior skin to keep with the dark foreboding atmosphere of the Arcadia zone, whilst a custom made black curtain suspended from our support truss provided the perfect internal divide to shield the back-of-house facilities. Smooth flowing aluminum doors with black tinted windows were also added, as well as one of our Opera End Walls.

Arcadia is an area of Glastonbury that traditionally comes alive at night and bathed in colour, the S5000 SL’s certainly proved an attention grabbing and imposing structure. With tesla lightning shows and the unforgettable mechanical spider, replete with flamethrowers and lasers, the Arc Bar formed an integral party of Arcadia’s contained realm. It’s not easy standing out when you’re competing with a fifty foot mechanical spider but we managed it.

Silver Stage would like to thank the organisers of Glastonbury 2013 for selecting the SL system and giving it the perfect platform for its UK launch.

← Unique boutique for Smashbox Cosmetics at Lovebox
Living up to the Hype: The S5000 SL One Year in →