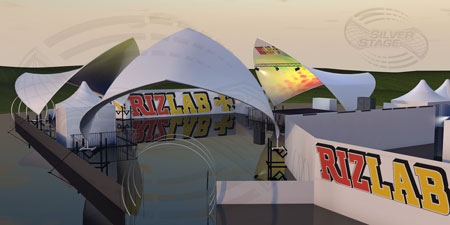 We were delighted that three of our fabulous S1000 canopies were used to create the dynamic Rizlab arena at the 2012 Bestival on the Isle of Wight. For the first time we aligned three of our canopies in a unique ‘de-constructed’ layout that produced a semi-covered arena with stunning visuals.

Working with Exposure, the hugely successful PR agency behind the Rizlab campaign, the arena and our structures were fully branded with the Rizlab logo.

We’re certain that visitors to Bestival have been bowled over by its appearance.